And so, our story begins

OM, the home planet of the Archons, is a peaceful planet. Unfortunately it had been so for so long that the inhabitants had forgotten the ability to fight. So when they were threatened by an evil entity, later to be known as the King of Blades, they were unable to defend themselves. This is why my father, Sparrow Lionheart, was chosen to be its champion and defender. During one of my summers home from K-9, my father was visited many times by a mysterious woman in red and white robes. I observed my father talking to her but he never introduced us. I was only later to learn that she was the Seer of the Spire, Theresa.

Apparently my father had demonstrated such strong ability in all three Archon powers, Strength, Skill and Will, that he was the obvious choice to face this threat. After his meeting with Theresa my father changed, and very rarely again did I see him laugh or joke around. His goal was to advance his powers to such a degree that he would be prepared for his battle with the ultimate enemy that he was destined to face.

The abilities that he had mastered until the time of Lucien's demise were just the beginning of his training. There was much he needed to learn before he would be ready to face his ultimate destiny. There was the level 5 Brutal Styles ability of Thrust, used by Assassins and Sand Furies, that needed to be learned. This ability was used to attack directly toward an opponent and was extremely difficult to block. There also was the level 5 Dexterous Styles ability of Aftertouch, allegedly used by Reaver, that allowed the user to curve a ranged weapons attack path, thus enabling the user to shoot around objects in the path of the projectile.

In addition to the Strength and Skill abilities there were also Will abilities to learn. For nearly every Will ability there is an opposite or countering ability. For Inferno there is Ice Storm. For Shock there is Tsunami. For Force Push there is Attract. For Chaos there is Atrophy. For Vortex there is Earth. For Raise Dead there is Death Touch. Even more secret and powerful spells exist such as Nuclear and its opposite Black Hole. To make matters worse there are even levels of magic even higher than level 5, so my father had to be gone for much longer than he wished in order to master these abilities and amass the experience to unlock the more powerful levels. To face this deadly foe he would need to be stronger and smarter, to even stand a chance against this threat.

The Crucible was his favorite place to gain experience, but sometimes they would run low on enemies and my father would need to go to the Colosseum to do battle. He also made several trips to Samarkand and the Northern Wastes for ability training. During the times that I was away at school and father was training, my brother Logan spent much time at home alone with mother and some say became a bit of a momma's boy. He would get so mad when he got teased for not having hero blood that he got into many fights at his school.

The King of Blades did not fight alone. Just as my father had a companion 'Dog' so did the King of Blades. His companion was a vicious mangy jackal named 'Lie'. € Editors Note: 'good' is to 'Dog' as 'evil' is to 'Lie'. (Reverse the letters and then drop the third letter.) He also was surrounded by a swarm of blood-sucking vampire bats. It is also rumoured that following behind him was a deadly venomous cobra, but no one fortunate enough to flee from his path had ever seen the snake. 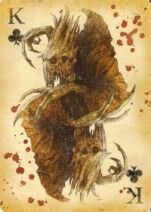 Retrieved from "https://fablefanon.fandom.com/wiki/The_King_of_Blades?oldid=7665"
Community content is available under CC-BY-SA unless otherwise noted.